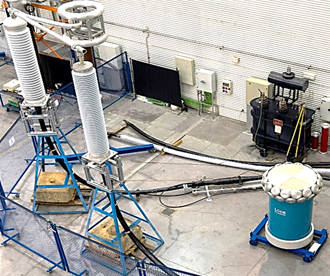 Electrical type tests and the electrical part of the extension of prequalification tests were performed on two 127 / 220 (245) kV cable systems manufactured by PRYSMIAN in 2020 and 2021 at LCOE HV Lab.

The cable systems with total length of around 35-40 m included the following elements:

The following electrical type tests were performed according to IEC 62067 Standard;

The electrical test sequence was completed, no signs of deterioration on both power cables and the assembled accessories were detected during the final examination.

LCOE-CTAT in the CIGRE 2022 Session and Exhibition

CALIBRATION OF GIS VOLTAGE TRANSFORMER UP TO 440 kV

Read more
This website uses cookies to improve your experience. We'll assume you're ok with this, but you can opt-out if you wish. Accept Read More

This website uses cookies to improve your experience while you navigate through the website. Out of these cookies, the cookies that are categorized as necessary are stored on your browser as they are essential for the working of basic functionalities of the website. We also use third-party cookies that help us analyze and understand how you use this website. These cookies will be stored in your browser only with your consent. You also have the option to opt-out of these cookies. But opting out of some of these cookies may have an effect on your browsing experience.
Necessary Siempre activado
Necessary cookies are absolutely essential for the website to function properly. This category only includes cookies that ensures basic functionalities and security features of the website. These cookies do not store any personal information.
Non-necessary
Any cookies that may not be particularly necessary for the website to function and is used specifically to collect user personal data via analytics, ads, other embedded contents are termed as non-necessary cookies. It is mandatory to procure user consent prior to running these cookies on your website.
GUARDAR Y ACEPTAR